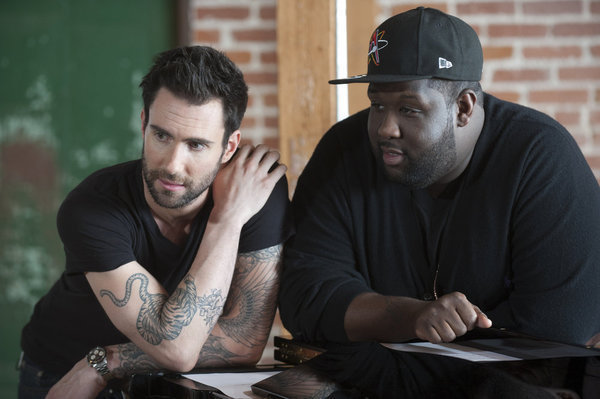 UNIVERSAL CITY, Calif. – April 29, 2011 – NBC revealed that it will add more star-power to its new vocal competition series “The Voice” with singers Reba, Monica, Sia (Furler) and music producer Adam Blackstone joining the series as new advisers who will lend their experience and talents to musician coaches Christina Aguilera, Cee Lo Green, Adam Levine and Blake Shelton for the next “Battles” competition phase.
“The Voice” next airs Tuesday, May 3 (9-11 p.m. ET) and then will be broadcast from 10-11 p.m. (ET) each Tuesday night on May 10, May 17 and May 24 following new episodes of “The Biggest Loser” (Tuesdays, 8-10 p.m. ET).
Aguilera (@therealxtina) will team up with singer/songwriter Sia (@Siamusic), Levine (@adamlevine) with Maroon 5 Music Director Blackstone (@bassicblack), Green (@CeeLoGreen) with singer Monica (@MonicaMyLife), and Shelton (@blakeshelton) with veteran singer Reba (@Reba) — eventually cutting their teams in half by pitting two of their own artists against each other in a series of dueling duets.
Each of the musician coaches chose their advisers to help them at the next “Battles” stage that lasts across four episodes. Reba, Monica, Sia and Blackstone were picked because they are in the trusted inner circle of the respective musician coach that they are helping. They are being brought in by the musician coaches to bring out the best in each of their artists, help to select songs that suit specific vocal styles and provide advice for performance. These adviser rosters will expand when the competition moves on to the live performance stage. […]
Blackstone is considered to be one of the industry’s top music directors. He has collaborated and toured with such artists as Maroon 5 (with Levine), Eminem, Jay-Z, Janet Jackson, Drake, Mary J. Blige and Kanye West, among many other top-flight performers. As a producer, Blackstone was named one of BMI’s “Top 10 Producers to Watch,” with his production credits including works with Jill Scott, Joss Stone, Kanye West and Diane Burch, to name a few. Blackstone’s work currently can be heard on tour with Chris Brown, Janet Jackson, Kid Cudi, and he frequently can be seen on shows as NBC’s “Saturday Night Live,” “Ellen,” NBC’s “The Tonight Show with Jay Leno” and “Late Night with David Letterman.”
[READ MORE]